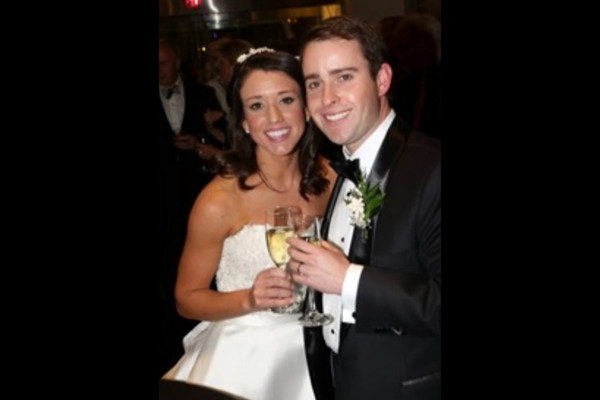 As the warming sun set on Saturday, December 31, 2016, family and friends gathered at Kansas City’s St. Elizabeth Catholic Church to celebrate the New Year’s Eve nuptial mass of Margaret Allen Straeter and Scott Henry Schoenfeld. With Father Andrew Strobl officiating, and the church still beautifully decorated for the Christmas season, the couple could not have picked a more perfect setting to begin their new life together.  As the couple’s wedding coordinator, Millie’s Event Designs was ever ready to ensure the evening’s events came together seamlessly from the old year into the New Year.

After the ceremony, guests were treated to additional celebration and merriment at the Kemper Museum of Contemporary Art; www.kemperart.org.  Once there, everyone enjoyed an open bar cocktail hour with passed appetizers of spinach and brie tart and crab cake with lemon basil aioli. The guests along with the bridal party then toasted the entrance of the newly married Mr. and Mrs. Scott Schoenfeld.  The couple’s first stop was the wedding cake table in the center of the museum, where they did their ceremonial cutting of the cake from McLain’s Bakery; www.mclainskc.com   Next, this New Year’s couple offered each other a traditional champagne toast.  The cocktail buffets were then open for everyone to enjoy the beef tenderloin mini sandwiches with dill havarti and pickled onions, grilled salmon with salsa verde, and Rosemary-lemon chicken skewers. These were accompanied by roasted seasonal vegetables with balsamic reduction and baked brie with berries and lavosh.

Once everyone had a chance to go through the buffet, it was time for the evening’s toast and dances. Mr. Bill Straeter, father of the bride, invited their guests to gather around the dance floor where he delivered a toast directly from the heart for his daughter and new son-in-law.  The toast was followed by the couple’s first dance as husband and wife and then by the traditional father/daughter dance the mother/son dances.  The floor was then opened up for all to dance into the New Year to the sounds of the Michael Beers Band; www.michaelbeersband.com.  As the party moved closer to midnight hour, guests were treated to cookies and given New Year’s party hats, tiaras and noise makers to celebrate the end of 2016 and the beginning of a prosperous 2017.  The happy couple was last seen as they made their way into a waiting limousine to begin the New Year and their New Life together.

Whether you are planning your own New Year’s Nuptials or just planning to begin your New Life together, contact Millie’s Event Designs where we are ever ready to seamlessly coordinate your special event in grand style.