Absolutely Picture Perfect in Every Way!

Absolutely Picture Perfect in Every Way! 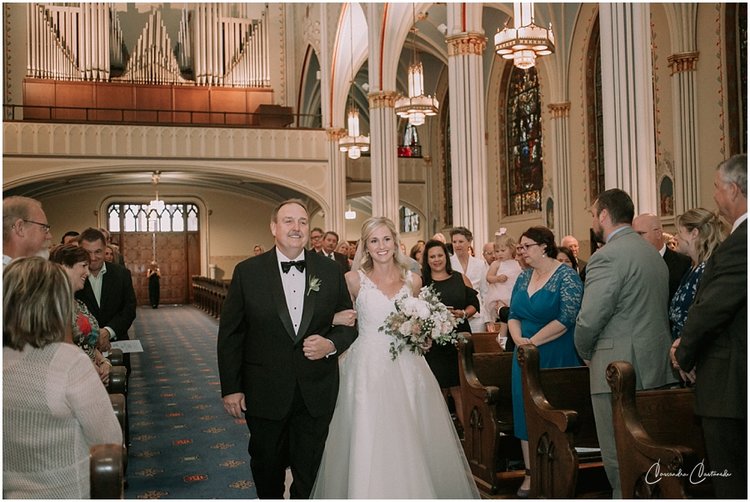 On the picture perfect Saturday afternoon of June 24, 2017, Katherine Mary Rossiter and Ryan Alan Hahne became man and wife at Our Lady of Perpetual Help Parish (Redemptorist Church) in Kansas City, MO. The bride’s uncle, Father Gregg Frankman presided over the ceremonial mass. Millie’s Event Designs was on site as the “day of” coordinator to ensure all of the day’s events went according to plan.

This absolutely beautiful day began early in the bridal suite of the InterContinental Hotel with bridesmaids, mothers and the bride enjoying a lovely breakfast with mimosas. It was then time for everyone to begin getting ready for the big day! The bride looked perfectly radiant for her first look with her father. This was followed by pictures with her mother and immediate family. At half past noon, the groom and the bridal party left the hotel and were transported to the church. The bride and her parents followed in a separate car to stay hidden from the groom.

The church bells rang promptly at 1:30 PM to begin the ceremony. The bride was glowing as she was escorted by her father down the aisle. Ryan stepped forwarded to take his bride’s hand as the two walked up together to the altar to say their vows. As the ceremony concluded, Fr. Frankman presented them for the first time as Mr. and Mrs. Ryan Hahne. The couple along with their bridal party then processed out to a send off by family and friends each one having white satin ribbon wands to wave over the newlyweds.  The bride and groom along with their bridal party stepped onto a bus that would escort them around Kansas City to take pictures before arriving at the InterContinental Hotel to join the cocktail reception.

At 6:00pm the guests were chimed into the ballroom to begin the evening’s festivities.  Once everyone was seated, the band, KC Flo, introduced the newly married couple, Mr. and Mrs. Ryan Hahne to the crowd. The couple made their way onto the dance floor to cut their three tier beautifully designed wedding cake from Dolce Bakery; www.dolcebakes.com. The newlyweds then enjoyed the traditional champagne toast. The bride’s father then welcomed everyone, followed by Fr. Frankman saying the blessing before the salads were served.

Each table was tastefully and perfectly decorated with bright colorful flowers that were enclosed by a glass terrarium that were designed by the InterContinental Hotel’s florist, Larry Wheeler www.kansascityic.com The guests were treated to a specially prepared entree’ of seared chilean sea bass with saffron cream and micro greens, chanterelle and chive risotto, asparagus, spaghetti squash and red pepper wedge.

Once the last table had been served it was then time to bring up the bride’s mother and father who gave a very heartfelt speech that left everyone looking for a tissue. The maid of honor’s speech followed then the best man. The newlyweds then came back onto the dance floor to have their first dance to the song, “Wave on Wave” by Pat Green. This was followed by the bride dancing with her father and the groom dancing with his mother. The band announced it was time to get this perfect party started as the guests made their way to the floor to dance the night away.

When it is time for your big day to be absolutely picture perfect in every way, you can count on Millie’s Event Designs and our “day of” coordination services to ensure that it goes according to all your dreams and plans.